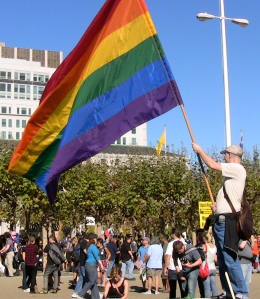 The last six years have been a whirlwind of back and forth decisions on the rights of same-sex couples to legally wed.  The latest hurdle in the 9th Circuit Court of Appeals puts another postponement on marriages while the legal process plays out — ultimately heading to the U.S. Supreme Court.  So I guess it’s fitting to say one just has to …”be a believer”.  And so I go back to 2008 when the ballot measure amending the California state constitution to define marriage as a union between a man and a woman had yet to go to the voters.  This rally outside City Hall defines the passion and spirit behind efforts to stop Proposition 8 dead in its tracks.  Even though the measure ultimately passed, the flames of justice had just begun to be fanned.  Now we’re watching history play out before our eyes.  The San Francisco Lesbian/Gay Freedom Band is the first openly gay musical organization in the world and this is their song.